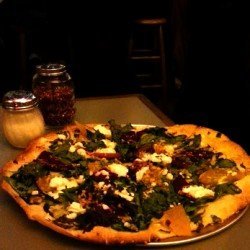 Well, fellow foodies, Maine Restaurant Week has come to a close. But just because it’s over, doesn’t mean we can’t relive it! Come along on a food journey with me.

Monday: Bonobo Pizza– The Bessie pizza, a simple caesar salad and creme brulee to finish it all off.

I love pizza as much as the next girl, and this was my second time trying Bonobo. I can’t say no to a pizza that embraces and encourages creativity, so the Bessie was right up my alley. The flavors were in all the right places, if that makes any sense. Traditionally, I’m a tomato sauce on my pizza person, but I respect that sauce free decision.

I made it to David’s for lunch on Thursday, which was my first time. I’ve been to David’s once before and I knew that the steak was going to hit a home run. I told myself before walking in that if steak was on the menu, I was ordering it. Lucky for me, they had surf & turf. Of course, you already know that the steak was delicious, but so was the “turf” part. Talk about some jumbo shrimp! Lunch was just big enough to fill me up, and the accompanying creme brulee didn’t hurt either!

Ah, Twenty Milk Street, you are a favorite of mine, probably because it was one of the first restaurants I ever tried in Portland, way back in 2009 when I was doing my college tour for USM. Oh, the memories. Memories aside, the duck carbonara was excellent. It’s usually made with ham (that’s how they do it in Italy) but the duck took a simple dish to the next level. This was the only restaurant that I visited in the second tier, so it’s not surprising that the portions were a little bit smaller. Though small, it was worth it!

My final destination for Restaurant Week was a really nice way to end the whole thing. I’ve only been to Portland & Rochester once before, but it’s starting to become a new favorite of mine in Portland. The atmosphere, the food…it all comes together in such a comfortable way. I was almost tempted to order off the regular menu, seeing as it was radically different from when I was there just two weeks before, but my server told me that the Restaurant Week dish was the best thing to choose from. So, I went with his advice, and no regrets here. Osso buco is a dish that is typically made with veal, but beef that literally falls off of the bone cannot be scoffed at. Paired with mashed potatoes and brussel sprouts, this was a meal that stuck to my bones long after we left. Might I add: three out of the four places that I visited served creme brulee (it’s in my top three for favorite desserts) and Portland & Rochester’s was the best one.

It’s sad that Maine Restaurant Week is over, but I’ll console myself by visiting more quality establishments. Maybe I’ll see you around!

My name is Sarah and I’m a local food blogger eating and drinking my way around Portland’s incredible food scene. Follow me to stay up to date on the hottest spots in our foodie city!